Skip to main content Skip to search
You are here
DR

Now thanks to the efforts of our members, community leaders and all our supporters construction is finally beginning on the initial phase of the project. This will be a monument wall where the broken stones will be permanently embedded to preserve the memory and legacy of our ancestors.

Visit this page often to follow the progress of the wall construction and other repairs to the cemetery.

The walls are finally complete! Finishing touches were made today with the completion of the parging on the wall foundations. There will be a grand unveiling ceremony on July 3, 2010 starting at the St. Columban Parish around 10:30 a.m.

Here's some new photos of the completed walls.

On Saturday, July 3rd, 2010, the descendants, and friends, of St. Columban will unveil the Cemetery monument dedicated to the original Irish Settlers in St. Colomban and, you’re invited!

Find out more about this important event.

After a Summer of rainy weekend in 2009 that delayed the wall construction things are moving along once again in phase 2 of the project to install the broken grave markers into the wall. Work began again on May 13, 2010. Here's an update from Ken Neil:

Here's some new photos of the recent work progress.

Today we received all the materials. Scotty and Martin arrived at the same time and construction was started. The blocks were laid for the first wall and the first course for the second wall. Tomorrow (Sunday), weather permitting, we will complete the second wall and start the third. If all goes well we should start the brick and headstone work next weekend. Scotty thinks that it should take about 4 weekends.

Some photos of the progress are available here.

That's it for now

On Saturday, July 11th, a few of us, including my nephew, Scott Leggo, and Ken Neil, our descendant project manager, were on site at the Cemetery. The objective was to measure the various broken stones and fragments in order to determine how much material, i.e. Bricks; mortar etc... was needed for the walls.

Scott, who is a professional bricklayer, has agreed to provide all his labor for free and in addition, his company, SCOMAR had some specific t-shirts made for their staff and some of the descendants for this particular project.

A few pictures are posted here.

It is likely that in the next few weekends that we will put out a call for all able-bodied descendants to help with this project. Many of the stones are very, very heavy and we probably will need some help to lift and hold them in place while the bricks are placed.

Just to let you know that the foundations were backfilled today. I'm impressed with the foundations. They are very substantial and very well reinforced. They are not going to move, no matter what.

On Saturday I met with Scotty, Fergus' nephew, who is going to do the brickwork. He was very excited to be asked to contribute to our project. We are extremely grateful to Scotty to volunteer to do this. He is a very experienced and competent mason who takes pride in his work. He is just as excited as we are to get going. Maybe we can start the weekend of June 26th.

I told Scotty that we would place the broken grave markers in front of the walls, approximately where they should be placed on the wall. Next, I have to order the materials, schedule deliveries and determine methods of payment.

Lastly I had a long conversation with Stanley last night and he insists that there are five or six headstones in the ravine next to the lilac bushes. I will discuss it with him again and see what we can do.

That's it for now,

We are all now the proud parents of 3 foundations in the St. Columban Cemetery. The pouring of the foundation walls was completed today. The forms will be removed tomorrow and we can backfill by Monday. Raymond will co-ordinate that with the city. It looks pretty good.

I hope to meet with Scotty this weekend to discuss the tech parts and the schedule. Fergus will advise.

Next we have to plan a meeting to choose the bricks and discuss the purchase of materials. I think that we can start within the next 2-3 weeks.

There are a lot of other issues to put on the table. When we decide on a date I will prepare an agenda.

I will try to attach a few photos from today.

Yesterday, May 21st 2009, phase one of the work began on building a very strong and long-lasting foundation for the wall that will honour our ancestors.

Claude Bourguignon; Ken Neil and myself were all on hand to watch this start of construction. Certainly after almost 4 years of meetings; planning; and fundraising for us all, it was an historic step.

It should also be noted that when the Town of St. Columban dug the trench on our behalf, that they were very careful not to disturb any bones that might be in the area. Luckily, it appears that there were never any burials in the immediate area of the cross near the front center of the cemetery – and none of our ancestors were disturbed.

The effort to build this foundation appears to have gone very well. Our form contractors appeared exactly on time; and the cement truck and another special “cement pump” truck also appeared on the site just as the forms were ready. Ken Neil certainly seems to have chosen the right contractor for this delicate job.

Check out the updated photo gallery.

Check out a compilation of videos of the footing construction!

The next step is to add a cement structure on to the base to bring the wall just above the level of the cemetery ground and then the Town of St. Columban has agreed to return and put the earth back in around this form.

Next we will have to choose the bricks for the wall and start the wall construction likely in a week or two, after the form and foundation have completely “cured” and hardened.

We may have to repair some grass and stuff in the cemetery where the trucks and other machinery had to move to gain access to the site.

Once again, we will likely have to raise additional funds, so if any of you would like to make a donation, please go to our donation page for details about making your donation to the St. Patrick’s Society of Montreal on behalf of this project.

We will keep you up-to-date as we move along with the project.

Thanks for your support

On Monday Claude and I met with Raymond Pigeon of the Fabrique. He insisted on doing the layout and we made sure that it was in the area that we discussed. Raymond was very co-operative.

On Tuesday morning again Claude, Raymond and myself were there for the excavation. The city sent in a large machine and after some initial problems with Raymond re the size of the pit, he wanted it to be 3ft. wide and we needed 7ft. After some discussion he agreed and left. We ended up 8-9ft. We couldn't achieve the 5' depth that we wanted because we hit solid rock anywhere from 2ft. to 4ft. This should not cause a problem as the excavator will pin the foundation to the rocks with rebar. The length of the walls will be 16ft.

The city will kindly set up security perimeter.

The forms were supposed to be installed today but has been delayed till tomorrow. The company will call me tomorrow an hour or so before so we can be there. (I'm attaching a copy of the new layout drawing which I did last night). Hopefully the concrete will be poured Friday. The forms will then be removed on Monday and the earth replaced by the city on Tuesday or Wednesday. I will confirm this after the pour.

We will have to do some repairs to the grass as the machine was track propelled and quite heavy.

I noticed that there were many headstones leaning precariously. There were also a few fallen over and a couple ready to go. Many were very, very dirty and need to be cleaned.

I took a number of photos available here:

Check out a compilation of videos of the excavation!

Next we'll have to choose the brick and blocks and make a list of all other materials required, decide where to buy them and method of payment. We have to set up a schedule etc. We will have to get together to finalize the technical end ie. size of block, type of brick, reinforcement etc.

Today I spoke with Raymond Pigeon. He was very pleasant and co-operative. He will be at the cemetery on Monday, May 18 to do the layout with us. He will bring whatever is necessary to stake out site.

I also contacted the foundation company and they confirmed that they are ok for Wednesday. Considering all the variables we should be able to start the wall within 2 weeks after that.

Claude advises that the city will start the excavation on Tuesday, May 19, at 8:30am. He will also ask the city if they can provide for some security around the excavation site and if they will refill after the cement has cured.

The city of St. Columban has agreed to do the excavation on May 19th., weather permitting.

The layout for the excavation will be done by one of our group, Kelley O'Rourke. She will also supervise the landscaping after the walls are built.

The foundation will be done by Les Fondations Arcotec de St. Columban. They will erect the forms May 20th. and pour the concrete May 20th. or 21st. Seven to ten days later we will be ready to start the brickwork. The brickwork will be done by a nephew of Fergus Keyes, again one of our group.

The bricks to be used will be new clay bricks with an antique look. We have not yet decided on a particular brick nor a supplier. I will let you know as soon as I have some information.

It is our aim to build a monument that we can all be proud of and that will last another 150 years. This is very important to us and we respect the concerns of the Fabrique. We have a common goal.

The fence has suffered again this winter and is in very bad shape. It obviously has to be reconstructed. Unfortunately we do not have enough funds to do this but any money left over from the walls could possibly be directed to the fence. We are lobbying the city to help to pay for the reconstruction of the fence. The Fabrique has suggested asking some local sponsors to pitch in financially as well. 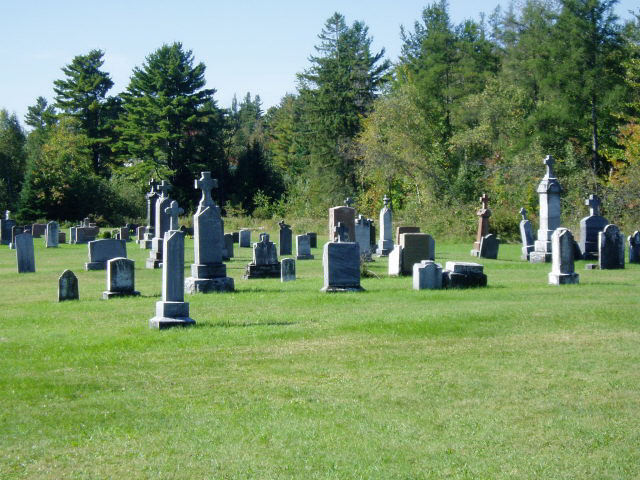 On October 1st 2005, a number of family researchers visited the area.

We had heard that some tombstones, due to vandalism and the simple ravages of time, had fallen over. We had also heard that many of them had been unceremoniously discarded behind the St. Columban Catholic Church.

Many of us were not prepared to discover that the final markers of many of our original Irish ancestors to Canada, were to be found in the “bush” behind the church. They were thrown on top of one and another – broken and forgotten. As well, we found some other broken tombstones, still in the cemetery, but they simply lay on the ground or were standing against other upright tombstones.

Please forward any of your comments on this Cemetery Restoration project using our contact form.